The coaching teams for the 2015 season have been announced with some familiar faces, along with some new!

Ricky Pearce will continue his work with the A Grade squad, after the team finished just out of the 5 in our first year in Division 1.

Trevor Greig will continue on as the B Grade coach after being elevated to the role from C Grade 2 years ago.

Micky Bawden is stepping down as coach of the C Grade, with Matty Leonnard taking up the job in what will surely prove to be an exciting year with some old faces returning for a kick.

The club also welcomes Damian Shaw as the Under 18s coach – strong numbers for the under 18s so far and looking to be a good year, so be sure to get your mates out for a run! 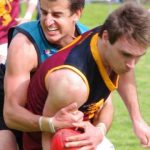