Congratulations to Gavin Shephard, for taking out the 2014 Portland Football Club, A Grade Best & Fairest with 106 votes.

He was followed by our fearless leader, Dale Laslett, with 94 votes, and 9 game 2014 superstar, David Bird, with 70 votes. 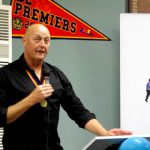