Portland Masters started twenty one years ago in 1994 when Greg Hamilton, the late Greg Young and Leon Day collected a few names of football retirees, who still had a bit of footy left in them, but didn’t want to play each week.

The aims of the Masters seemed to satisfy their needs:

–   Footy for men over 35 years of age
–   Modified, yet competitive
–   Approx. 12 home and away games per season, almost fortnightly
–   Special exhibition games and a national carnival held for participation of any player
–   Enhanced social interaction between participants and families, both on & off the field

Footy For Fun
Losing doesn’t mean much to Masters players because there is no premiership table or finals. For this reason alone, the game is played more for fun and enjoyment, with a high level of skills on display. The emphasis is on celebrating the game on and off the field, especially in the bar afterwards.

The Older We Get, The Faster We Were
The skill levels are still there, but the speed at which they’re executed is somewhat less. In the early years, the side boasted many ex- A1 Amateur League players. We train each Wednesday night and meet in the bar afterwards. We have welcomed many new players to the Club over the years, form a variety of other clubs. Masters caters for blokes who have never played before, or haven’t played since juniors. Many players are over 50, and one is 62 soon!

The inclusion of the extra team at Portland has brought new fully financial members to the Club, from a variety of areas. We have supplied new junior members, a wealth of sponsorship and added managerial expertise. We are an autonomous and self managed outfit.

Over the last 15 years, we have maintained our consistency, losing on average only about 2 games per season. Losing, however, doesn’t mean as much, because there are no finals. For this reason alone, the game is played more for fun and enjoyment, with a high level of skills on display.

The emphasis is on celebrating the game on and off the field, especially in the bar afterwards. Wednesday is training night at 6pm, all are welcome.

Portland Masters would like to sincerely thank the Management Committee and the Ladies Committee of the Club for their continued support.

If you wish to get involved in any way, please contact: 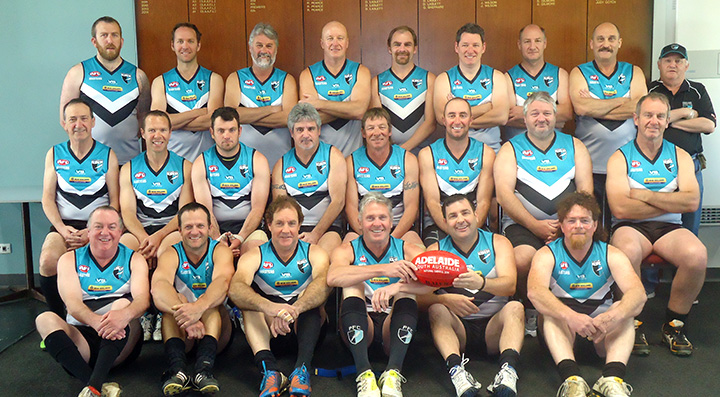 Portland was formed after an amalgamation between the Riverside, Ethelton and Alberton United Football Clubs in 1997. Located in Port Adelaide, the club fields 3 senior teams each week - A3, A3R, C3, as well as an Under 18s and all junior divisions. Get out to a training session and jump aboard the Thunder Train!